This piece of equipment is a life saver during quarantine. it’s sturdy and easy to build tools are included. it’s affordable as well. Very satisfied.Warning: this product will turn you into highly desired man so if you have a spouse that is insecure and jealous you might want to reconsider this order. 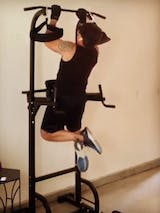 B
Brennan
Amazing how sturdy it is

I was pleasantly surprised how sturdy it is, I'm 5' 8" 170 pounds and its great for chin up, hanging climbers and so much more 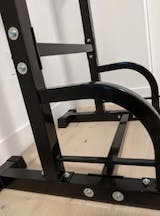 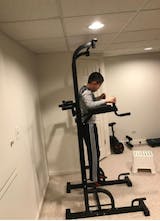 Meets expectations.Pretty sturdy; flexes a bit when using the pull-up bar, but not worryingly so.The angled forearm rests for the leg lifts are a nice touch.I was worried at first that not all the components were included, particularly the screws, after comparing the part listing in the instructions with what I physically had in front of me. Turns out it was all there, but it's basically a puzzle to figure out which screw in the instructions to use; the drawings are pretty bad.No mention in the instructions on where to use the washers, but they should almost definitely be used on the head end of the 16 screws used on the lower half of the stand (see photo), as those are the only locations where you otherwise only have 1 ply of metal. 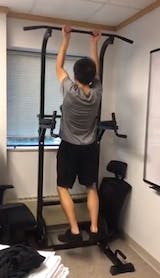 Bought this based on Modus reviews. Use it in my garb where ceiling is about 3.5m high so I can have the pull up bar on the highest setting. It is sturdy yet light enough to move about in the garage. Allows you to achieve great form on pull ups as bars either side and ahead restrict sway. Ab work outs are very ergonomic and comfortable with tailored back adjustment and tilted arm pads securing you into the position. This tilt does make the dip station quite wide but you just do wide dips and get good at them. Press bars a real bonus and the foot print of this station is easily within 1m2 so one of the smaller foot prints on Modus but still sturdy.massembly was really easy but definitely hand tighten everything first. My dip bars needed some serious wrenching to get tight and prevent wobble but it's do able. My wife and kids also use this station thanks to its adjustability. Overall good value for money and excellent aftersales care too.