Qi Wireless Car Phone Charger Fast Charging Pad
$49 USD
The Qi Wireless Car Phone Charger Fast Charging Pad is made to charge your devices quickly and efficiently. It is equipped with technology that allows the charger to identify the device, and will transfer the fastest charge without damaging it. The pad is easy to use and compatible with most phone cases. A convenient and stylish wireless car charger that allows you to use your phone without having to fuss with wires. Perfect for daily commutes or road trips, this Qi wireless car charger will keep your phone charged as you drive in style. The stylish pad is small enough to take with you, but efficient enough to charge your phone as quickly as an outlet.

Since this is the only wireless charger I've ever purchased, I can't honestly speak for the speed of the charge. However, I frequently forget to unplug a wire charger, which isn't good for my phone. This charger automatically turns itself off when your phone is fully charged. Plus, it temporarily lights up when the "sweet" spot for charging has been found. I'm getting another one for my office. 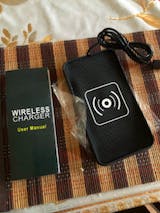 I'm a simple man. I like things that are cheap, I like things that work, and I like things that look good. This device only does two of those things. You might think that's bad but I've had others that only scrape by with one. I think it's pretty rare to find a product that does all three. I've tried three other wireless chargers for my S21. One of them only charges normal speed because it's 7.5 watt. Another won't charge at all and gets stuck in an incompatibility loop. The last one tries to charge fast, then I get a notification that it's incompatible with fast charge.This wireless charger is the only one that I have gotten to fast charge my Samsung S21 with a 20 Watt C adapter. If you're in a similar position, stop looking for one and get this. It is so frustrating that I have to weed through multiple products that all claim to do the same thing, then fail to perform when it comes time to charge fast.Thank you Modus for making the only one that has worked so far. My only complaint comes full circle with the beginning, this thing is plastic and ugly. But it works. If it had better aesthetics like some of the failure competing chargers, it would be a 100% no brainer recommendation from me. However, it charges fast and was cheap, so it's a five stars from me. 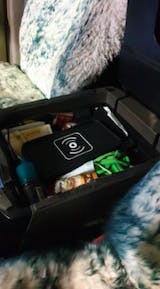 M
Mugen
Prefer this over the Anker

I bought this Modus and a similarly priced Anker for comparison. Both do the job as expected, but I prefer the Modus over the Anker for two reasons:1. Modus uses the newer USB-C cable over the Anker's ancient micro USB cable. I hate the hooks on those things.2. The LED lighting scheme is better implemented on the Modus.On the Anker, a teeny tiny LED light comes on at all times while it's charging. The light is too tiny to see sometimes against the black color of the pad. Then it stays on at all times, which can be bothersome for people trying to sleep next to it.On the Modus, the moment you place something on it to charge, a ring of green light comes on and blinks a few times. There is absolutely no mistaking that it's charging as nobody can miss that. Then the green light completely goes out and won't disturb anyone sleeping. See, once I know it's charging correctly, what do I need the light for? Much better thinking here compared to the Anker. 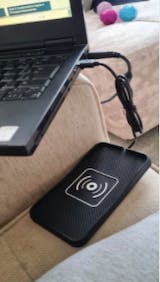 Works great. I've ordered 4 of these for friends and family because it's just the right thing. USB-C cabling. My Samsung s10E lights a circle on the screen momentarily so it's easy to get it well centered. If off-center very much you are not charging. However, It also lights up on the side for a few seconds when charging so you can tell from that if you're "connected". Wifes new iPhone doesn't have the circle image so it's more visual to see it centered or use the LED light. No use shopping much, this works perfect. 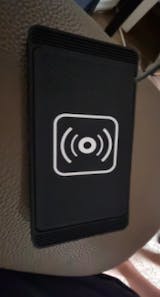 When I got this it wouldn’t charge my phone although it lit up when I plugged it in. I emailed the customer service department for Modus and they got RIGHT back to me (spoiler alert: she suggested I restart my phone and that worked). And checked BACK in the next day to make sure it was working. So I give them 100% for customer service. Nice little charger with rubber base, too. 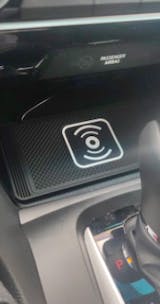