The ProWirelessSound™ will ensure that you have the best tool to become a real rock star. It will definitely change the way you play!

Tired of feeling restricted by a cable when playing your guitar?

Have you always dreamed of playing your guitar wirelessly, but were deterred by the complicated set-up, the loss of sound, or cable extras?

Experience ultimate freedom with our ProWirelessSound™ - Wireless Guitar Transmitter just plug and play with no interruptions, be cordless, and move freely with every beat of the music. No setup is required. It is extremely reliable for any gigging musicians. Just simple, hassle-free and your guitar tone is sent straight from your instrument to your existing amp, pedalboard, or studio gear.

Supports 4 sets of devices working at the same time. The Transmitter & Receiver supports a range of more than 70 feet and operates at a 2.4GHz ISM band for crystal clear broadcasting, ensuring your signal's integrity.

Our guitar system features a digital wireless technology that delivers a full 20Hz-20 kHz frequency response, so you’ll hear your guitar tone in great detail. You'll be left to concentrate solely on your performance, thanks to this near-zero latency (meaning no delay).

The WirelessSound™️ offers up to 4 hours of playtime and 200 hours of sleep time (built-in rechargeable lithium Battery).

I am the middle of buying a second one for a Korg Kronos keyboard going into a stereo setup. I purchased one just to see if I was wasting my money. For the money this is really clear, no latency I can detect. Mind you the keyboard is LINE out and not mic level out so you will have to lower down the volume on the receiver side. Very pleased. will write another review when I go full stereo! Amazing for $29.95!! EASY CHANNEL SETUP!!This is an addition to the review above. They work PERFECT for a stereo keyboard setup. I programmed one for channel left and the other for the right channel. You then have a discreet two channel system. I only play my keyboards in full stereo. The only way you can get a realistic Leslie effect without having a real Leslie. Kudos!! Plus strings sound more realistic in full stereo. spreading the speakers across the entire stage! Awesome! 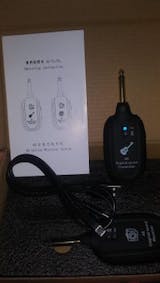 Up until recently, I've been a massive analog purist. Cables, true-bypass analog pedals, tube amps. My trip to the dark side started with the Line 6 Helix, which I have learned to love and appreciate the practicality. Years ago I tried a Line 6 wireless system and HATED it. I work on cruise ships and we had a guest artist come onboard that insisted I use his extra wireless kit to share the spotlight with him on Hotel California. The wireless system totally changed my tone and was cutting in and out during the performance. Awful.This little Lekato system works flawlessly, and let me say as someone who is picky about my tone... there is very minimal differences between going wireless with this and going straight into my amp with a regular 1/4" wire. I've been using this for the last month now on all of my gigs on land. It exists permanently in my guitar case, except when I have to charge it after gigs. Turn it off in between set breaks and it should last 2 normal 3-hour gigs.Low latency, the ability to recharge it instead of replacing batteries, and the affordability of this system are my main takeaways for anyone interested in trying this out. I have a few products from Lekato now and they have all impressed me. Highly recommended.

I could not be happier with this product. It sounds great, it's easy to use...I've been playing guitar for a long time, 2 decades. A decent wireless system used to be an Incredibly expensive, somewhat complex to use and temperamental piece of equipment. Times have changed, this Wireless system consists of two small objects that look like key fobs. I plugged it in, flipped two switches, depressed two buttons, and my guitar had a clear, clean signal, with the same level and signal-to-noise ratio as the 20 foot guitar cable I had used it to replace. There was no alteration in my tone from what I could tell, and I tested it with both a Class A tube amp (Orange Dark Terror), and a processor/mixer/high-end studio monitor setup. My signal was clear and consistent, with no drops or distortion. Anyone who's used Wireless gear in the past, will be familiar with picking up stray radio Transmissions where you're supposed to have only a guitar signal.. I can happily state, that in 3 hours of testing, I didn't hear that happen once, either on the tube amp or through the mixer.The majority of the time I spent playing through the mixer/monitor setup, using a Jam track streamed live from YouTube as backup, though I intentionally took at least 15 minutes with each set up to play unaccompanied so I could listen to a range of tones, playstyles and effects.The one thing I didn't yet take the time to truly test was battery life, even without a thorough investigation, the performance already outstripped what I could expect from older style Wireless Systems, I played for nearly three hours, without any signal degradation, on the charge that the units came out of the box with. Performance like that is better than I'd even dreamed of. The five star rating for battery life, is me giving them the benefit of the doubt. I will update the review if for some reason this changes.The product came in a sturdy box, similar to a traditional microphone case, with a Durable foam nesting and a magnetic closure, the the Box itself is cosmetically appealing and won't look out of place sitting on a mixer board or a desk. It'll also do a fantastic job protecting the unit, if you throw it in a gig bag or a tool box full of cables.The unit also included a cord that branches off into dual micro USB, to facilitate simultaneous charging with both units.

I picked this one mostly due to its small size. Some of the others were approaching "wallet" size. They looked really dorky in the advertisements, hanging off a guitar. This Lekato doesn't look dorky, and it is light enough that you forget it is there.I like the sound quality a lot. Perhaps ever so slightly rolled off highs vs cable. I'd need a spectrum analyzer to tell them apart.I heard no crackles or static. I did notice clicks when someone clicked a button on my TV's remote. Other than that it was dead quiet.I tried the unit with an American Stratocaster, through both a Polytone or Fuchs Lucky 7 MkII. The clean channel on of the Fuchs is great for clean jazz tones, and wirelessly, sounded no different. Really nice clean sound with the Lekato. Overdrive sounded great too.$32 ??? Hell of a deal! Hence the 5 star rating.

Product works well . Sound guilty great but when run though a processor has a bit of a hiss noise not that bad though